“The wind was not the beginning. There are neither beginnings nor endings in the wheel of time. But it was a beginning”

– The Eye of the World, Robert Jordan

I was in sixth grade – perhaps seventh. Having worn through a few copies of The Lord of the Rings, my fifth grade teacher had lovingly given me a copy of Terry Brooks’ “Sword of Shannara” for graduation, as perhaps a subtle hint that there were more fantasy authors out there than just the one. (In my defense, that particular school didn’t have a library. And fantasy novels were far rarer in the 80s than they are now.) Having made that great discovery, I began reading at a great rate, along with three companions in my literary journey. Now, if I’d had the kind of heroes journey I was reading about, the four of us would’ve become inseparable companions, filled with a respect and friendship that would warm our memories.

The way it really worked was that there were four of us who like to read fantasy in the tiny podunk logging town I was raised in. If we wanted to talk about books, it was with each other. We did play Middle Earth Role Playing together. But despite my best efforts, fondness never grew from forced interaction. In retrospect, I deeply pity the guy I had a crush on who was forced to deal with me six days a week (we went to the same church) for multiple hours a day. I saw him at reunion and he got a slightly haunted look seeing me. Sorry!

One of the books we discovered was “The Eye of the World”. It was a good one. I had bought a copy, and we all read it in turn. The seven hundred page sequel followed, and was similarly devoured. And then, bliss! The third came out! Granted, it was crazy expensive on my $40 a month food/clothes/fun money budget (if you knew me then, this explains why I dressed the way I did), but life was too short to not buy books! It would be great to finish the trilogy and move on to the next one. I may have pondered how wonderful it was to have a living author who would keep writing! I never fully got over the betrayal of Tolkien dying without knowing how much I loved him.

But what? The series didn’t conclude? I’d read all three back to back – with labyrinthine plots and a cast that had to be in the hundreds, you couldn’t rely on your memories of the last reading a year or two ago to see you through. You had to start over.

Well, a four book series wasn’t unheard of. We’d allocated out the purchasing of these books. None was available at any library we had access to, so they must be bought. This was back when a bookstore meant Waldens – before the big box bookstores came and long before they were replaced by the great online retailers. We had a deal. I’d buy Jordan. Chad bought Terry Brooks. Jack bought Lawhead. And maybe Heidi somehow weaseled her way out of being responsible for buying any author’s books.

A year later – in high school – the fifth came out. When I graduated from high school I was still there on release day, buying the seventh volume and praying that this time he’d really wrap it up. I spent hours in my bedroom reading the books and listening to “All the Best from Scotland volume II” on repeat – they’re still inextricably combined in my head. My collection of books was getting unwieldy, my budget largely spent on Starbucks, and the time commitment required to read seven books at about a thousand pages a piece was significant. But I was there. I even got that seventh book signed. 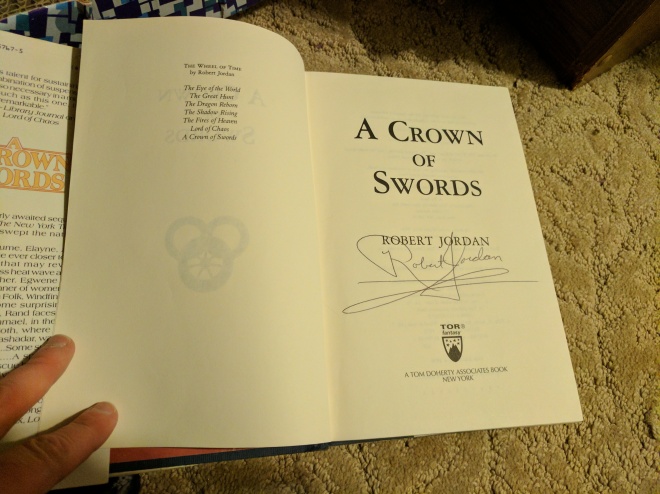 In college when the eight came out, I may have made time to reread it. Maybe over the summer. But then it was followed by the ninth. Rumors began of his ill health. He had a fatal diagnosis. Surely, one thought, this would encourage him to oh… I dunno… actually close a plot thread for once? Ha! Great at opening them. Lousy at closing them. He even went to write a prequel. It’s possible that I was actually angry about this.

He died and I never read his last books because I couldn’t justify weeks of rereading, and he hadn’t *finished*. It all felt very tragic.

He had, though, written down how he was planning to some day finish up the plot. That thread was pulled up by Brandon Sanderson, who had probably been buying them from Waldens in the mall just like I was. That “last book” turned into three books, ponderous as their predecessors if a little better in the “closing plot threads” department.

And finally, the last book was written and the last story told in Spring of 2013.

In the Spring of 2015, I got a new job with a new commute. A car commute. By myself. As time has gone one, my tolerance for NPR has gone down. (I like the non-political news far more, and that’s been a vanishing commodity over the last two decades.) So I needed to listen to something. I figured that this was the perfect time for me to finally catch up and hear the end of the story!

So every single commute for the last TWO YEARS I have spent two hours a day listening to the Wheel of Time on audiobook. Especially around book six or seven I would get to work irritated. The entire commute could be cut by an editor (if only!) and there would’ve been no material change to the story.

But it was entertaining. And over this vast repetition, it also became much more real and tangible to me than if I’d only read it. Last weekend, recovering from a bout of labrynthitis, I laid on a chaise and listened to about eight hours of the conclusion. I realized, staring fixedly out the window, that this was it. I’d spent two years living with Perrin the Blacksmith and his strength, and Mat the womanizing gambler, and Rand the started-every-book-less-mad-than-he-ended-the-last-one, and Nynaeve with her temper and braid and Pevara who I think might be the only real hero in the whole book and and and… well, the list of characters is long. And I know them all with the intimacy of daily contact over two years.

The end of the series, if you’re curious, did not satisfy. All battle, no epilogue. There were major plot threads left open. (Spoiler alert – seriously, how did you not manage to explain that Olver is actually Gaidal Cane reborn, which is sooooo obvious!) We don’t see how the world does get remade, or how these overarching conflicts that I spent DAYS of my life hearing about were finally resolved. I got to the end, but I could’ve stood that last half of the book to be what came after. Alas, I didn’t get it.

But with all this – with the annoyance at the lack of editing and lack of satisfying culmination – I have done it. I have finished the series. I enjoyed it, whining aside. And it is almost certain that I will never read it again. That brings a sense of loss. I suppose I could read it, if I wanted. But those down sides are too steep to encourage me to ever climb them again. It’s just not worth the effort. And so it is that this journey, which I started twenty-seven years ago and spent endless hours on, is done. It is finished. I will never again hear of Thom Merrilin in his patched cloak or the hawk-nosed and fierce Faile.

Farewell, fictional friends. You will be remembered fondly.

It is not THE end, but it is AN end, for the wheel of time has neither beginnings nor ends.