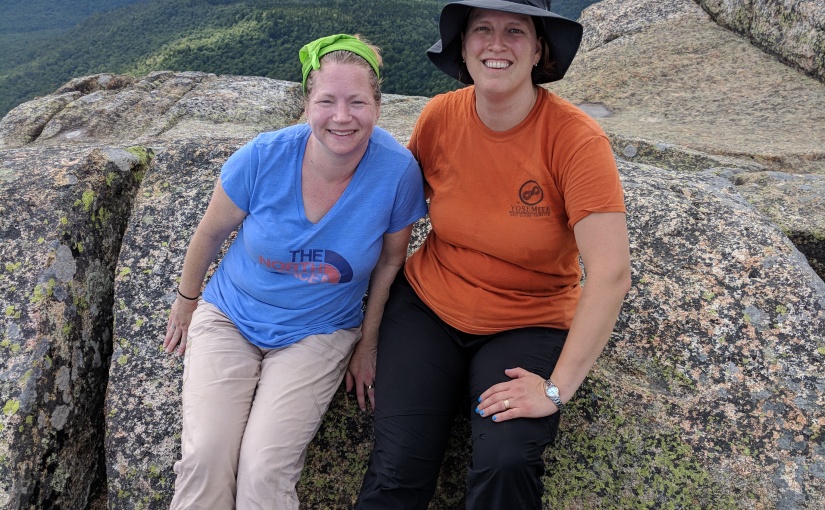 Carter Ledge Trail crosses a small brook and soon ascends a steep gravelly slope with poor footing, then turns sharply right and up at a gravelly slide with a view of Mt. Chocorua; this turn is easily missed, especially on the descent. Continuing to climb steeply… The trail passes through a sag then climbs, steeply at times, up the slope of Third Sister, with several excellent outlooks, but with some ledges that can be dangerous in wet or icy conditions. Higher up is a particularly tricky scramble across a potentially slippery, downward sloping ledge (especially difficult on the descent)… White Mountain Guide 30th edition p.385

About the time we hit that gravelly slide bit (on the descent, of course), we’d already been on the trail for about 8 hours. I’d noticed the beautiful way the light slanted through the jack pines that we were just about to lose it behind Chocorua, on whose summit we’d so recently stood. I figured that it was probably a bad idea to point this out to Erin, who was clinging to the ragged edges of sanity after the “slippery, downward sloping ledge” bit. It had rained torrentially the night before and was very humid, turning all the granite rock faces to a slip-slide zone. But I picked up the pace just a bit anyway.

My fears were justified. We reached the blessed safety of our car at just the tipping point between when ruining your night vision with a flashlight would’ve been worth it. Every muscle in our body screamed. Successive adrenaline jolts were wearing off, and we scarfed a bag of M&Ms by the fistful. Erin is an extremely polite and well mannered person. So when she turned to me to express feelings on the hike all she said was “I am NEVER hiking that mountain again.”

It’s possible I’d slightly undersold the experience. You see, I’ve wanted to hike to the top of Chocorua REALLY BADLY for about the last six years. I made an attempt six years ago (on a shredded knee, right before surgery) but had gotten turned back. It’s logistically challenging. It’s definitely a full day hike. The kids definitely aren’t up for it. And it’s several hours drive from my house. Also, you really really shouldn’t do it alone. This made it hard for me to “convince” my husband he wanted to do it, or to figure out how to do it at all. But this summer, a window opened. The kids were off at Camp Gramp chasing the eclipse. Adam was at Gencon. And I had a summer weekend all to myself. Sometime this spring Erin and I were talking about hiking and the high pressures of modern life and I said, “Hey, you wanna come on this hike with me? We’d get a hotel, make a weekend out of it, and really relax.”

The last few times I’ve gazed at Chocorua’s lovely & taunting profile I’ve taunted back “This time I’m going to get you!” But for having been on my bucket list for years, I’d spent remarkably little time thinking through which trails I wanted to take. We’d been using a hike book the last 6 or 7 years, but Irene did a number on several off the local trails and we’d gotten in a bit of trouble, so I stopped at EMS to try to buy a new copy. They were fresh out! But hey, if I wanted a “Paddling the Ohio” copy no problem. I figured I’d stop at the Ranger Station to get a copy there. But traffic was awful and I hit the ranger station after 5 when it was closed. But hey, I had a recent map of Chocorua! Erin and I reviewed the route that night.

We had two cars and wanted to do a circle route. I picked one of the shortest loops that seemed to also include the most viewpoints. “So we’ll go up the Hammond Trail, pick up the Liberty Trail across the summit, and then come down the Carter Ledge Trail to White Ledge Campground, which has plenty of parking. It’s about 10 miles. Sound good?”

Well, it was absolutely gorgeous. The pull up was long and hard and humid. The ground was steaming. The leaves were steaming. We were definitely steaming. It had rained so hard the night before, but it was still warm – touching 80. We’d brought lots of water – nearly 5 liters – as well as a UV water purifier that I’ve wanted for years but never splurged on. (See also: stop at EMS) But we were losing water at a great rate, which was ironic given that vast muddy puddles littered the trail. The rocks couldn’t dry off in the humidity, so stayed slick the whole day. And we needed to climb 3,200 feet. Then summit about three different peaks in a row. Then descend that 3,200 feet.

We ran out of water with about 3 miles to go. Fortunately, I did have my schmancy fancy new water purified and got us a critical additional liter for the last two fast miles out. Did I mention on that descending Carter Ledge Trail we saw not a single other human? We were definitely going the wrong direction, and were very likely the only people on that trail. We couldn’t call mountain rescue if we got in trouble, either, since Erin’s brother would’ve been the one to answer our call and that might’ve been mortally embarrassing.

This climb was one of the most physically challenging things I’ve ever done. Every single stabilization muscle was spent. The big muscles of my legs screamed. Bands of pain radiated across both knees with every step up and down. The next day, I could hardly walk up or down a staircase. The biggest surprise was how incredibly sore my arms and core muscles were. We did a LOT of climbing and used a lot of arm strength to get ourselves up and down. I’m not sure any part of my body didn’t hurt. Erin had some blisters she didn’t even know she had because their pain signals were hidden in the overall pain-signals from all other parts of her body.

But oh my friends, what a triumph it was. What a great blessing it is to push yourself to and past your limits, and emerge victorious from the battle. I live so much in my mind, that to spend 10 hours being very much within my body was a great gift. It was truly everything I wanted – and more. Now to figure out how to talk Erin into making this an annual event….