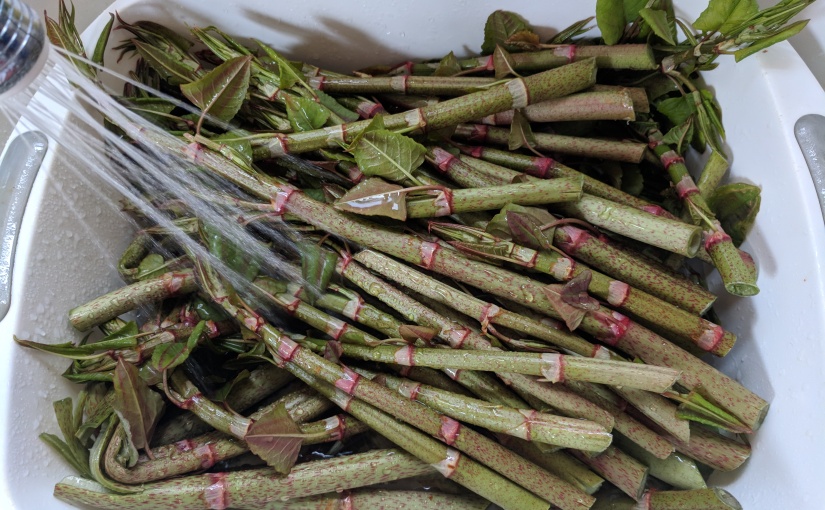 Among the many fantasy hobbies I have, one of my favorites is fantasy foraging. All winter long, I have Northeast Foraging on my bedside stand, attempting to memorize the facts for field garlic or may apples or fiddleheads so that on some future date I might be walking through the Fells, stop short and knowingly declare to my companion “Ah, it looks like the epazote is in season. Excellent, my last preserved set is nearly done, and my enchiladas simply aren’t the same without it!” Then (in my fantasy life) I’d take out my beautifully prepared foraging kit, expertly select a sustainable harvest of the plant in question, and then go home and use it in my latest home cooked meal that night.

I do have a great imagination, don’t I? It’s a consolation in this troubled age.

On Saturday, Adam and I took a run along a portion of the as-yet-unfinished Tri-Community Greenway. Running along, I spotted not two blocks from my house one of the approximately five plants I *can* ID at sight – the ubiquitous Japanese Knotweed.

Today, in a break in the rain, Adam and I returned to the spot, knives in hand, to make our harvest. A very very short time later we had about 10x more knotweed than we needed, and I returned to the kitchen. In my fozen reserves are one pound of chopped rhubarb from last season. It’s difficult to get one’s rhubarb and one’s strawberries to tie out perfectly, especially when one has preteen boys who like strawberries. So here’s my plan – I’m going to make rhubarb knotweed jam, using a rhubarb jam recipe. It’ll probably be really quite sour. It may be terrible. It may be amazing. Here’s the journey of discovery!

Step 1: Cut up the knotweed
Fortunately, my handy foraging book explains how to prep the knotweed for use. I only used the smallest shoots, guaranteeing tenderness. I contemplate, cutting them up, how much like octopus they look. I’ve given up eating octopus on the belief that they’re too smart to eat. The same may be true of Japanese Knotweed, but I show no mercy to the invasives.

Step 2: Decide on a jam recipe
So here’s a secret for you. There aren’t THAT many variables in a jam recipe. Basically you have fruit mass, sourness, sugar & pectin. The only tricky one is pectin – some plants have it natively (mostly apples). Most don’t. I ended up with:

1 lb cut japanese knotweed
1 lb frozen cut rhubarb
1/2 cup water
7 cups sugar
1 tablespoon butter (I always add this, despite no recipes ever calling for it, to keep the foaming down. #secrets)
1 tablespoon lemon juice (I debated – this was definitely sour enough – but decided the anti-oxidation factor was worthwhile)
1 packet liquid pectin (Certo)

First I boiled the rhubarb & knotweed in the water until tender.
Then I added the butter & sugar & lemon juice.
Once it was at a roiling boil, I added the pectin & boiled for one additional minute.
Then I jarred it.

Step 3: Realize that making up recipes is harder than it looks
Japanese knotweed is green. Rhubarb is dominantly red. When you mix red and green together, whaddya get? That’s right. Puke brown. With greenish flecks. The color was just… wrong. Bad wrong. You think about taste in a recipe. Perhaps while baking you think about leavening. But you forget about color, about scent and about texture. Or rather, I did. This one had like 5/7 correct. That is, er, not enough.

Still I sallied on. Lots of foods go through ugly duckling stages. And hey, were we so shallow that we wouldn’t eat food just because it tasted red and looked brown? Well, maybe. I started coming up with a list of people who were known to be polite, regardless of provocation. You know, possible future jam-gift recipients.

Step 4: But how does it look in practical applications?
A great joy in life is mopping up hot jam with fresh bread. The moment of truth arrived. I have 8 jars of this stuff. Would this be my stocking stuffer at Christmas to the long-suffering? Would it be so bad I should just pour it out here and now? Had I discovered a new culinary delight, the likes of which the world had never seen? It was the moment of truth.

And it was… pretty good? Not bad? Probably better than the jam you get at Denny’s in the little square Smucker’s packages? Perhaps? If you’re into a sort of, er, greenish flavor overtone? And it doesn’t look quite as bad in the jar as in the pot, either.

Step 5: Make other people eat it
I didn’t invite anyone to dinner tonight. No, I rather informed them that they were eating my food. Unless they had a better idea, which I knew they didn’t. I didn’t invite someone who would give me a polite platitude, but rather someone who would tell it to me like it is. I got a mixed reaction – I got neither a flat rejection, nor a subtle request to go home with a jar.

So, all in all, probably a B- effort. That’s below the level I’d need to repeat the experiment.

What did we learn from all this?

1) It’s easy to harvest too much Japanese knotweed, but no one cares if you do

2) Maybe it would be good pickled. I liked the shape of the circles. Raw, it’s ok but nothing you’d ever crave. It is apparently very high in resveratrol, but I’m pretty sure the 2:1 sugar to weed ratio more than counterbalances that. Also, I’m pretty sure resveratrol is just an excuse to drink wine.

3) I actually liked it as a jam ingredient except for the critical failing of color. I am trying to think of a seasonal, local green fruit to pair it with. I thought of green grape (I think a sweeter pairing would be better than sour/sour). If you like mint, I think that would be a really interesting pairing (cut down on the sugar and make it a meat sauce). It might also go well in a pie. I’m thinking blueberry would overcome any green and balance it out. I have quite a bit set aside in the freezer, so I might actually try this latter option.

So friends! If you would like some extremely nutritious, hyper-local, small batch artesenal jam, let me know. I have seven jars currently looking for a home – first come, first served!

5 thoughts on “Beebop a reebop a Japanese Knotweed preserve”