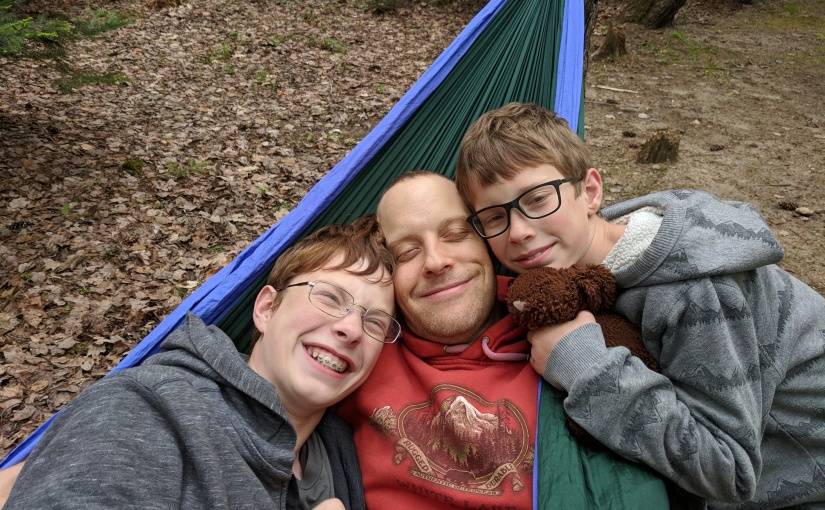 1) Stop on the way up at the Toys’r’Us (sadly likely last time) & Starbucks in Portsmouth
2) Late lunch at Miss Wakefield. One time, we forgot Grey’s old Kindle there on Labor Day weekend. They had it waiting for us Memorial Day Weekend the next year.
3) Camping at either White Lake, Covered Bridge or Waterville Valley campgrounds
4) Soccer at Almost There tavern. 100% of the time, Gerd will be there. If it’s slow, he’ll do magic tricks.
5) Dinner at Hart’s Turkey Farm. Order the poutine. Poutine is always a great choice.

This long weekend contained all of those ingredients. It was Waterville Valley, this time. In a rare moment of discretion and wisdom, I checked Google Maps to get a route from Miss Wakefield’s to Waterville Valley. Sure, it’s tempting to run the Kancamagus just for fun, but it’s also nice to get to your campsite before dark. Google directed me on a route I hadn’t taken before, likely some rural way cutting up Rt 25 (home to one of the scariest drives I’ve ever done in dense fog) up through byways to 49. Easy-peasy-lemon-squeezy.

At first the route was captivating and charming in that old New England way with stately old houses, scenic fallen stone walls, beautiful vistas and ancient orchards. Then it started getting really rustic. Then it stopped being paved. At one point, bouncing along a rutted dirt road which had been one lane for at least the last two miles, tires tipping over the top of a hill whose other side I could not see, I began laughing hysterically with joy. THIS WAS A REAL ROAD (and it wasn’t my fault we were on it). I have gone years and years without getting to drive a real road in a completely inappropriate vehicle! I skirted massive holes, went over granite boulders, edged along with bare inches between my wheel and a dropoff and generally had a blast. There was that one minor issue, when whining in the back seat about hitting their heads on the top of the car made me slow down a bit and then I didn’t have enough momentum to make it up the hill. For a while, I didn’t quite have leverage to make it back down, either. Eventually I got myself straightened out. Of course, that’s when we saw the first other vehicle in half an hour. It was too narrow for him to pass me, and I needed a moment to figure out how I could move my vehicle aside before making another attempt at the hill – gazing at the ruts my previous attempt had made.

I pulled out my finest “Mountain Mom”. “Sorry, I’ll move aside. I need to plan my attack for the hill better. Google Maps didn’t mention this.” The gentleman in his ginormous 4×4 pickup turned white, “What, you’re on The Sandwich Notch Road by surprise! (He shuddered.) You don’t have four wheel drive, only all wheel drive?” We discussed routes for a moment in a swirling vortex of mosquitos. We agreed that my best bet was to take the outside corner. He said he’d drive it for me (“I drive this road all the time”) but… “I wouldn’t want to be responsible for damaging your vehicle.” I pulled my car, laden with bicycles, tents, NERF guns and terrified children out of the way. I didn’t mention that I don’t have all wheel drive either – I only have front wheel drive. Crappy front wheel drive. He passed me. My chicken family told me they’d meet me when I got to the top. I pulled back, gunned it, and made it to the top no problem. Eventually they walked back up to me.

Adam says I’m not allowed to ever drive that road again, unless I have a four wheel drive. Meanie! We totally didn’t die. Man was that fun.

It ended up raining less than expected this weekend, which is not to say it didn’t rain. It just didn’t rain *much*. Adam got to do a lot of rope and tarp-tying, which surprisingly makes him very happy. The boys went swimming in the river. Grey and I did some geocaching. We played a Cthulu game. There was laser tag and Nerf gun wars. The campfire was going pretty much non-stop.

Our middle night in, with freshening winds rising up the valley along the Mad River, Adam and I were just getting ready for bed when we heard this iconic creaking, breaking and crashing sounds. Very clearly a tree had just fallen, very nearby. We listened for screaming – none. We went to where we heard it and were assured everyone was fine. One person said, “It wasn’t as bad as it sounded.” When I went back in the light of day, I had to beg to differ. I didn’t take pictures of their camp site, but this was only a few feet from tents, tarps and cars where a whole family was staying.

This was especially alarming to me since there was an already splintered pine tree very nearly overhanging our tent. This widowmaker was very stably caught in the Y of a very lithe and healthy looking birch tree – I couldn’t see how it could come free. But it creaked alarmingly in the winds. I would claim I couldn’t sleep soundly with it up there, but that would be an out and out lie. I think I might have been the most comfortable I’ve ever been in my life lying on that air mattress on Sunday morning.

The boys were remarkably helpful this time. I kept having flashbacks to camping when they were like 18 months old and 4 and I had conniptions every single night trying to get them to sleep. But now they could start fires, they did the chores we asked (from carrying firewood to water to fetching – anything!) They were cheerful and helpful and kind and… they went to bed when they decided they were tired. It was amazing. I never dreamed this day would really come, but it did. All those years of effort have really paid off! Now to get them to like hiking…