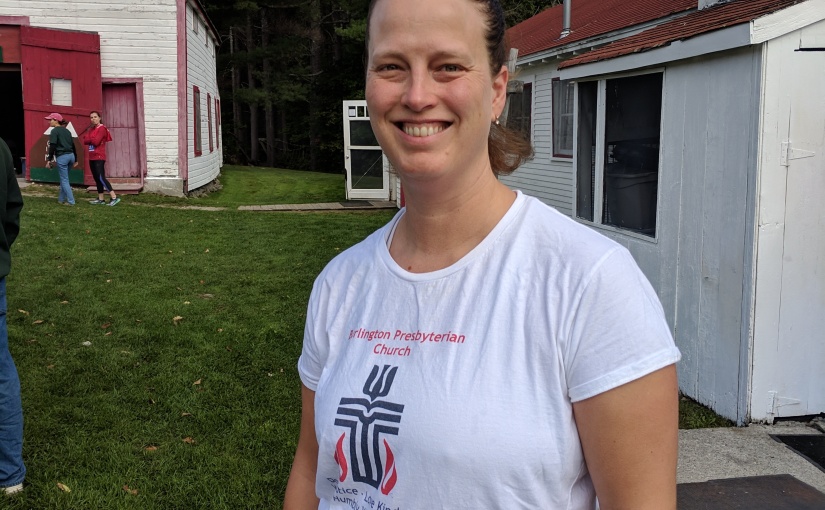 A remarkable thing happened at midnight on Saturday – I left my 30s behind and entered my 40s. At that point, I was sitting around a backyard fire with a bunch of my friends around me, having celebrated for most of the evening together. It was a fantastic day, ending a fantastic decade.

The weekend started heading north as fast as possible after work. Camp Wilmot was hosting a 5k, and Grey had begged to be able to go. My husband was mysteriously hiding in the kitchen and forbidding me to look in. So up north Grey and I went, arriving at Wilmot shortly after dark. We sang songs by the fire in the 100 year old barn, then moved to the equally ancient farmhouse for a ceilidh. That evokes a certain celtic air, but in fact there was rather more Macarena – although we did do one really fun reel! It was about 11 when we went to sleep in the gables of the old farm house. I was amazed at how quiet it was outside. There was no noise of traffic – no matter distance. All you could hear was the rustling leaves.

We slept well and woke up sliiiiightly late for breakfast (but not too late!) After breakfast, we were at our leisure for a few hours. As Grey caught up with old friends, I took myself on a tour of the grounds and walked around White’s Pond. It was a remarkably peaceful hour. I was responsible only for myself. There was nothing I needed to be doing, or even could be doing. I could walk at my own pace, take as many pictures as I felt like taking when I felt like taking them. It is a beautiful place – so quiet and peaceful but full of so much vibrancy and life. And it’s a place my children love deeply. Grey waxed rhapsodic about waking to the sound of the loons in pearly gray mornings there.

I was back in plenty of time to get ready for the race. The weather was perfect – cool without being cold with a bit of a breeze and a bit of a haze. I forgot my arm band, so I handed my phone over to my son to capture the memorable moments. I got off to a fast start – it’s hard to accept being passed up by thirteen year old girls who are singing Moana as they easily swoop by you. But the route was not an easy one. It was picked to be as unhilly as possible, but Camp Wilmot is in a hilly area. So there was a pretty brutal last hill up to the North Wilmot church. Still, thanks to a summer of running about 4.5 miles per run, I didn’t die (or, you know, stop running). I ended up with a pretty darn decent 33:24 finish – 19th of 43 total runners (I thought there were 61 – alas no). I even had some church friends who made the trip up and were cheering for me as I crossed the finish line! It was a pretty affirming way to say goodbye to this decade. But best of all was that through the generosity of my friends, family and especially my church, I raised enough to send a kid to a week of summer camp next summer. Overall, Camp Wilmot raise $5,233.50! I know how important Camp Wilmot is in the life of my kids, and I’m thrilled that more kids will be able to go!

We came home immediately after I finished running the race. I went upstairs and gave myself the gift of taking a shower in my brand new shower. The steam unit is CRAZY POWERFUL. It’s a really, really sweet experience and I don’t think I can go back to my old shower. Then I came downstairs, willfully ignoring what was going on around me, and got dressed in a nice dress just because. Finally , Adam told me what the circumstances really were. He’d spent days getting ready to make all my favorite foods, and invited as many of my friends as he could find contact information for. He was expecting 60 people and was wondering if: chili, cornbread, six loaves of bread, cassoulet, beef barley soup, macaroni and cheese, egg salad sandwiches, blue cheese scalloped potatoes, bagels with cream cheese and lox, Doritos, watermelon, massive amounts of Lucky Charms, butter toffee peanuts and a Grey-made chocolate birthday cake were going to be enough food. (Edited to add: also, four pork tenderloins, wilted leaf lettuce salad & a charcuterie plate of my favorite meats and cheeses) (Fun fact: it sure was!) Those are, of course, all my favorite foods. I stuffed myself past stuffing. He did a fantastic job and it was all really delicious.

The first guest to arrive was, to my great surprise, my sister! She and I don’t get a chance to see each other very often, and it was amazing to have her here! It was also rather fun to watch people do double-takes when they heard my voice from someone who wasn’t me. Heh. We sound a lot alike. I was incredibly touched by the fact that Adam had asked people to bring or send poems/writings about me. They were amazing. Adam’s was an ode to coffee (which I think we can all get behind). One friend wrote a column. There were a significant number of limericks. (Apparently Brenda rhymes with Splenda.) A friend’s daughter drew a picture of “Brenda the Bold”. I woke up this morning and reread them all – my heart is greatly touched.

I think it’s natural at moments like this to take stock of your life and ask yourself whether you are living your one and only life in the way you intend. This weekend felt pretty amazing that way. I’m physically healthy and strong. I’m raising my children to be people I enjoy spending time with, to have strong moral and philosophical cores. I know how to nurture myself in nature. I have an amazing relationship with a remarkable man who shows his love for me in thought, word and deed. And caffeine. And I’m surrounded by an astonishing number of people who care about me. I really can’t imagine what more I could ask for in life.

Thank you to all of you who came, or sent notes, or sponsored my run, or wished me a happy birthday. It mattered a lot to me, and I’m very grateful. If we missed someone in this, forgive us! Finally, if you were there and you have pictures, please add them to my album!