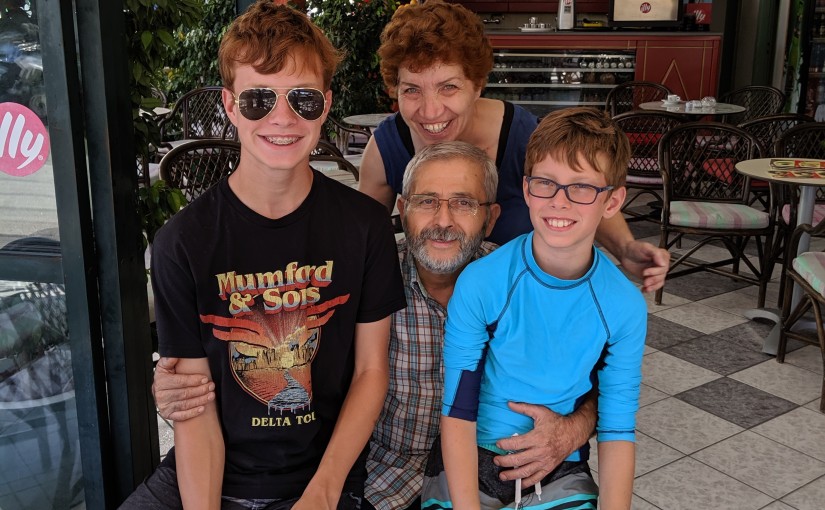 Back in the ’80s, when women had perms and air travel was just adjusting to being unregulated, Adam’s family came to Greece for the first time. Adam’s father worked for Saudi Aramco, and the four of them lived in the American compound in Dhahran. Greece is a very convenient hop from Saudi, so their first trip became an annual journey.

I’m not sure why they picked Aegina. It’s not a fashionable island, although it had a moment in the sun then, still discernable by the thirty year old abandoned buildings. It’s pretty traditional, and many of the people sunning themselves on the beach are Greeks escaping Athens for a day. I’ve heard few American accents here.

Thirty years ago, Adam’s family left the hotel to find breakfast, and ended up at the Cafe Marina, or as we simply call it, Panos’s. For the decade the family spent a week every summer here, the cafe was home base. They’d break fast here in the morning, reading through breakfast. They’d drink at chat at the bar until late at night. Adam would bring his book and read, then fall asleep. 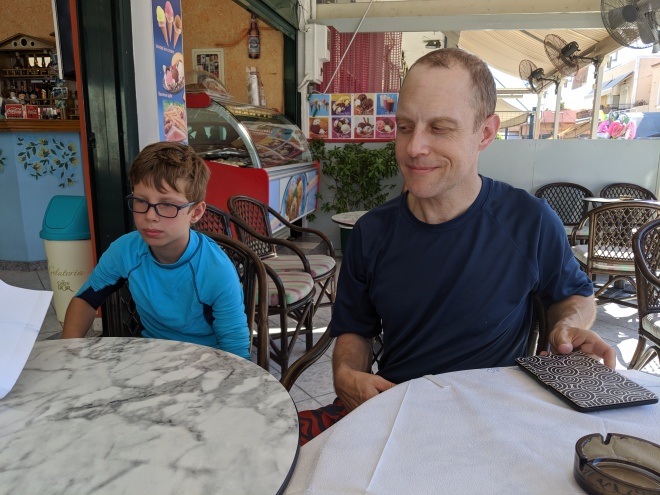 Twenty years ago, Adam brought me here on our honeymoon and introduced his young bride to Panos and his wife Gelen. I read all of Ivanhoe sitting right here, and developed a fondness for the English breakfast.

We talked a lot before we came about whether Panos would still be here. A lot can change in twenty years. The economy here has struggled greatly. The refugee crisis and fiscal austerity have punished the county. Panos was not a young man. My father in law, Michael, who had shared many a beer at Panos’s bar, died ten years ago. We could learn little from internet stalking. But I tried not to get my hopes up when we arrived for breakfast yesterday.

But as we walked up, there they both were – Panos and Gelen. After a few moments, they remembered Adam (Eleni was particularly amused at how Adamiki used to fall asleep here). They think Grey looks like a little Adam. 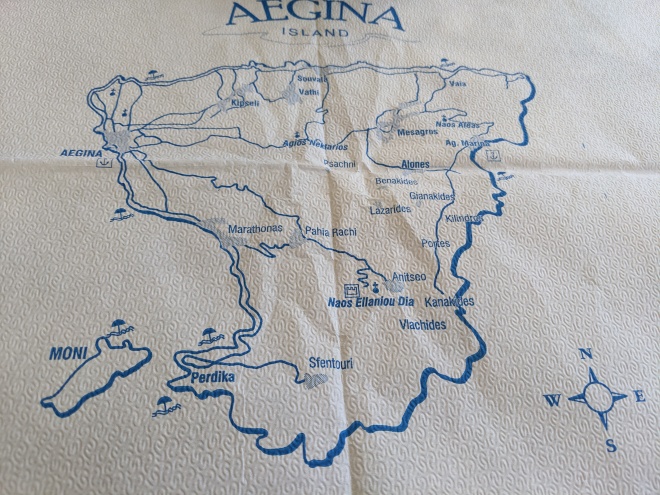 I ordered the English breakfast. The boys all dove deep into their books (they’re working their way through the collected works of T. Kingfisher on my Kindles), and for another generation, we connect. It is a great joy.