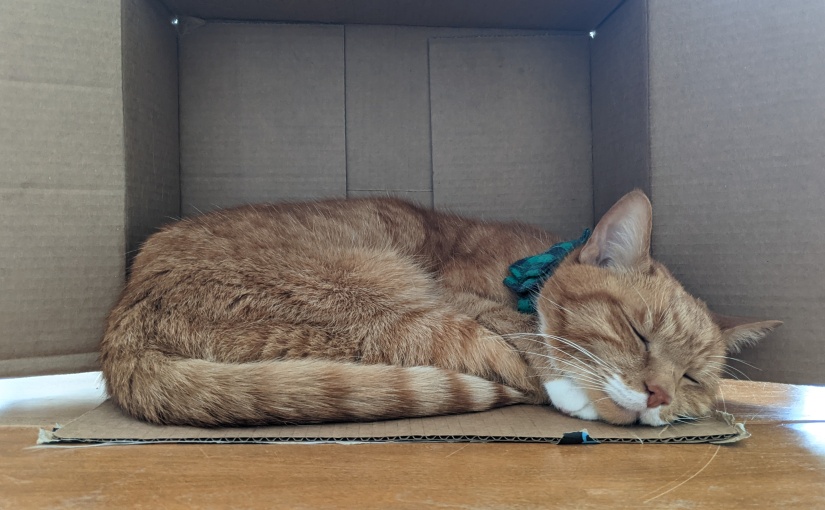 Just over eight years ago, Grey did 170 chores in order to earn the right to get a cat. This cat was preordained to be Data, for reasons that made sense to an 8 year old. When we went to find Data in the shelter, we looked at all the pretty cats and the young cats, but the ones that grabbed our heart were the friendly cats. It was a pair of brothers – 8 years old and therefore very hard to adopt. One was all black – he became Data. One was a veritable tank of a cat – hefty and friendly and assertive of his desires. Sticking with the incredibly subtle Star Trek theme, we named him after a fellow confident pudge – James Tiberius Kirk. He also looked a bit like a Roman emperor on a bender. So Tiberius he was. (You can read the welcome-home post here.)

We had not had Tiberius home for a month when we discovered that although he scarfed his food, he also immediately barfed it back up. He was in liver failure and only the application of vast wads of cash (and feedings through a neck tube every four hours) kept him alive. Eight years ago last week, he was within 12 hours of me deciding that he wasn’t going to make it. But then he perked up, started holding down food, and healed. And earned the nickname “Tube-erous” for his feeding tube.

These two cats have spent the last eight years knocking things off counters, eating any unguarded food, learning to open cat food containers (and trash cans, and cupboards), and walking through my unfinished watercolors. They sleep together in ying-yang patterns on the chairs. At this very moment, Data has decided that there is enough room on my lap for a laptop AND a lap cat. He is sitting on my arms. The guys have been the friendliest, snuggliest cats in the world. They want nothing more than to snuggle (and steal your Cheetos). They’ll flop on their backs and show you their bellies – and will actually not claw you to death should you succumb to temptation and put your face in their fuzz. They are really people-cats, and want to be with you and get scritches. (Now Data is grooming Tiberius). They lay on legs. They stand in front of tvs. They join us at the dinner table, because they are part of the family.

Two weeks ago, Tiberius started yowling. We took him to the vet, who found a grapefruit-sized tumor in his increasingly emaciated belly, and gave him two weeks to live. He is a sixteen year old cat. Options for surgery or treatment seemed cruel rather than kind. So he’s had two good weeks with anti-nausea drugs (probably the longest our floor has gone without cat vomit) and pain medications. And he’s definitely fallen off in that time. Not that Adam didn’t JUST pull him out of the trash can, but he’s spending most of his day sleeping and he’s light as a feather. Most of his weight is now tumor, and he trembles when he jumps from the kitchen table to the sink to see if anyone HAPPENED to leave anything tasty there. We won’t let him fall all the way to suffering. On Friday, we’ll say our last farewells and bury him beneath the plum tree, to the left of the pawpaw planting.

I am so grateful that we had the company of both these cats during the long internment of the pandemic. Their sweet affection has warmed fearful days. Their purring company drives fears away. Their soft fur has been a consolation to young and old in this household. Their mischief – considerable as it is – has been both exasperating and charming. I so wish for more time, but mostly I’m so grateful for the time we have had together.

One thought on “Tiberius Milkstache Flynn”